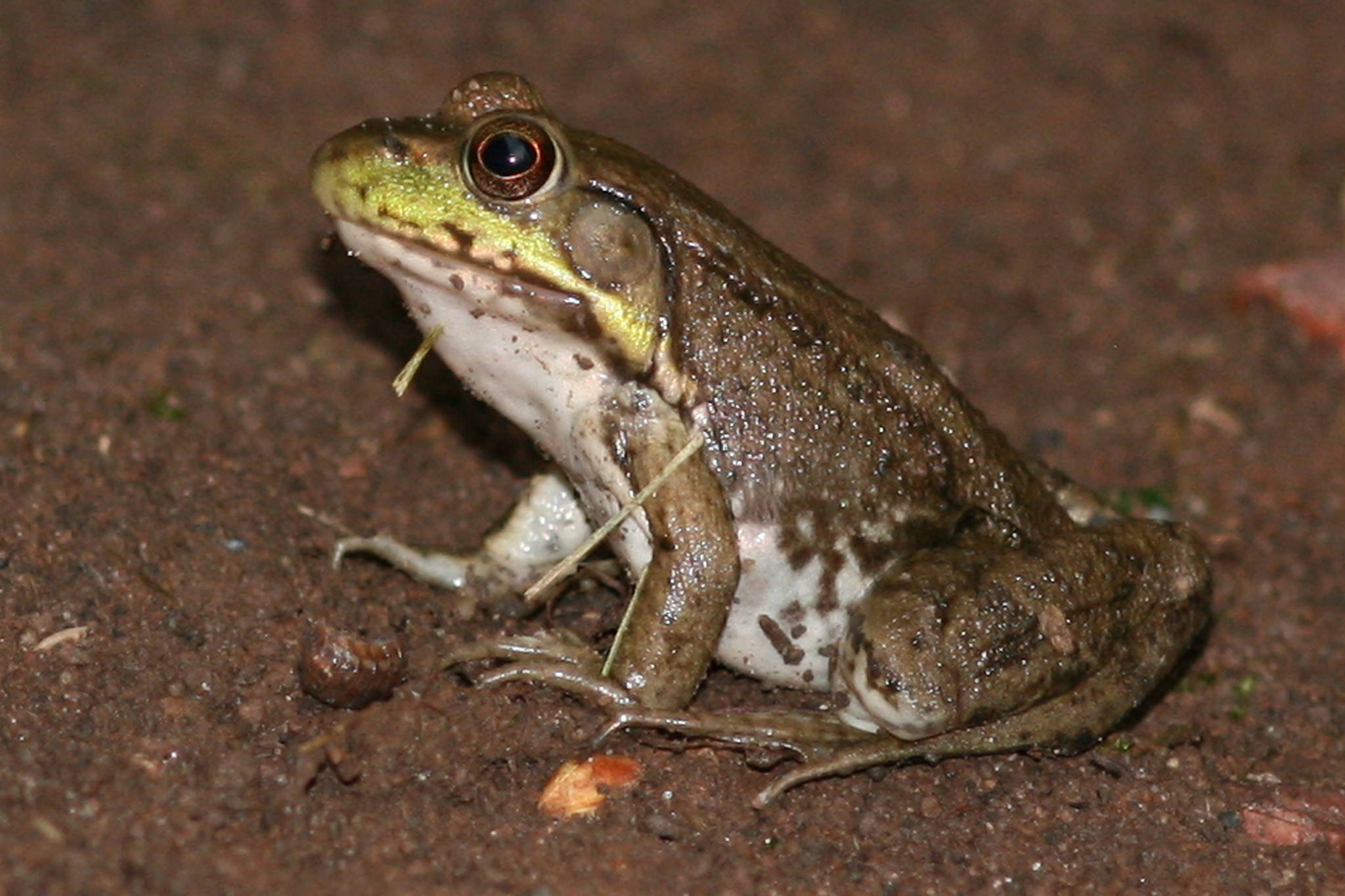 Frogs range in size from the largest, the bull frog at eight inches from nose to rear end and weighing up to one and half pounds, to the tiniest of all North American frogs, the little grass frog at barely an half inch long. You may not see a frog the entire time you are in Ebenezer Creek but you can be assured they are there. Learning to distinguish them by their calls is the best way to determine which species are active at any given time of the year. Once you learn the calls, you can go online or reference a field guide to see their different sizes, colors and shapes.

Male frogs do all the calling to attract a mate. While bull frogs could be present, I have never heard one in Ebenezer. Their calls are the lowest of all calls and sound as if a baritone-voiced person is saying harrumph very, very slowly. Some references describe their calls as sounding as if they are saying jug-of-rum.

One of the most interesting calls you will hear is made by our second largest frog of up to six inches in length, the pig frog. Some herpetologists (people who study reptiles and amphibians) refer to them as southern bull frogs. When you hear one, you really do think there is a pig grunting nearby!

On occasion you may hear two balloons rubbing together. Those are the southern leopard frogs calling to their lady loves. They are around three and a half inches long. Sometimes you hear a carpenter frog hammering nails into wood and that is indeed our very busy carpenter frog. The carpenter is smaller and more slender than the pig frog at around two and a half inches long. Other times you might hear two tiny metal balls tapping together and that is the mating call of one of the smallest frogs: the cricket frog. These one-inchers are your best bet for actually seeing a frog. Look on the lily pads for these diminutive amphibians.

The tiniest frog in North America can occasionally be heard here in Ebenezer, or at least on your way to Ebenezer, if you have your windows open on a wet summer morning or evening. The little grass frog’s call sounds as if you are running your thumb down a small-toothed comb.

The one frog that I think is the most thrilling to hear is the bird-voiced tree frog. These frogs at nearly two inches long with calls that are high pitched whistles that often trill.

Sometimes you hear what you might think are ducks quacking. Those are the squirrel tree frogs up in the trees. Other times you might hear a lot of doorbell buzzers going off. Those are the green tree frogs. Both frogs can be as long as an inch and a half. During the winter months when temperatures are the chilliest, the spring peepers dominate. They are a small frog too, but have big voices and true to their names, they peep!

Tree frogs are equipped with gripping toe pads that help them climb up trees and bushes and even walls! They prefer humid climates and at campgrounds are often found in shower stalls much to the horror of uninformed bathers. Tree frogs are the ones you will observe in the water or on a lily pad or maybe a log. Most of the time however you will not see them at all. They are vulnerable to predators such as snakes, birds and alligators and it is to their advantage to remain hidden. But they need to find mates and therefore their distinctive calls help them advertise their location and their species so the right lady f#268dd6rog can find her mate.